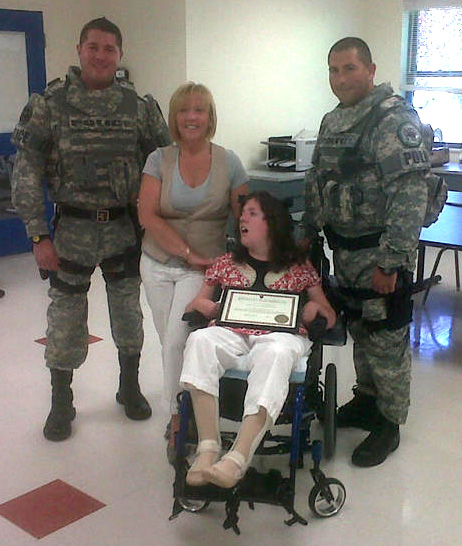 After experiencing a life-changing moment, 21-year-old Tori Lynn Andreozzi is still making a difference in the lives of others.  She and her mother, Cathy, were presented a certificate of appreciation Tuesday for donating tactical vests to members of the West Warwick Police Department.

These vests, similar to what the military uses, are made of lightweight, flexible material and cover the officer’s torso and upper arms with pockets that can be moved around.

Patrolmen Joshua Kennedy and Detective Tony Bettencourt, who demonstrated the protective  vests, said any new equipment the department gets is welcome.

“They are much lighter and cause much less fatigue and much more flexibility,” said Kennedy.

“A call can last for hours,” said Bettencourt. “You never know how long you’ll have to be in your gear.  Our other vests are falling apart.  Having these is such a great thing.”

The new vests were donated through the Tori Lynn Andreozzi Foundation, established in 2003 after Tori, then 12, sustained a severe brain injury after being hit from behind by a drunk driver while she and her brother were walking home from the bus stop after school.

Prior to the accident, Tori was very involved in karate, she always made time for others and always wanted to help those in need and served as a protector if a fellow playmate was being bullied.

The accident injured Tori from her waist down and from her shoulders up.  Her heart stopped a number of times once she arrived at the hospital and she was left without the ability to walk, speak, or eat but because she is a fighter, Tori miraculously survived.

“Her favorite movie is ‘Pay it Forward’,” said Cathy, “and I know her fighting spirit helped her get through the toughest days in the hospital.”

As a way to help other organizations like MADD, SADD, the Brain Injury Association of Rhode Island, Youth in Action and other outreach programs in educating people that a split second can change someone’s life forever, she started the Tori Lynn Andreozzi Foundation.  100 percent of the foundation’s proceeds go toward an organization or program.

The mission of the Foundation is to educate young people about good decision-making, inform the community about ways it can make a difference, promote legislation that improves highway safety, draw awareness to traumatic brain injury, and support families dealing with tragedy.

Cathy said through the countless challenges of the medical issues, research of brain injury and knocking down doors for information to offer her daughter the best care possible she, Tori, and Tori’s older brother Robbie take steps forward every day.  Cathy said Tori and Robbie have a special sibling bond that seems to transcend the injury, which have been very instrumental in her rehabilitation.

“One of the most challenging parts has actually been driving by the middle school where it happened,” Cathy said.  “I still purposely avoid certain things.”

Cathy knows there are things her daughter will never experience but she’s choosing to focus on what Tori is able to do.

“She inspires me every day,” said Cathy.  “Law enforcement deals with tragedy too much and it got me thinking, how can they affectively protect us if they don’t have the right equipment to protect themselves?”

“She approached us and asked if we had any needs,” he said.  “Now the department has four new tactical vests.”

Her mother said the two have visited the ACI, where Cathy has shared their story.

“People have made bad choices and the kids who have seen her picture will come up and will tell us they’ve been inspired to do better,” she said.  “They tell us that if she can deal with adversity, then they can deal with whatever’s going on in their lives.  It helps them put things into perspective.”