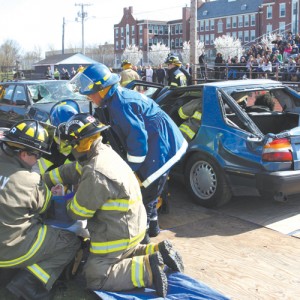 Four-hundred-eighty-two Westerly High School juniors and seniors are sitting in the bleachers at the football field on a bright spring morning, watching six dead and one critically injured teen being extricated from two wrecked cars.

Another girl in a glittery prom dress is being administered sobriety and breathalyzer tests by a Westerly police officer. She fails both and is led away in handcuffs. The dead, played by student actors, lie very still on the ground, convincingly smeared with fake blood. Emergency workers finally cover them with dirty white sheets and walk away.

The spectators are quiet and serious. They know that this scenario is being staged for their benefit, but it still looks disturbingly real.

Westerly senior Sarah Duggan, of Students Against Destructive Decisions, had been planning this event since last December, and timed it so it would take place close to the senior prom. She said she would be happy if the message prevented even a single teen from drinking and driving. “Even if it’s just one person. I just hope someone doesn’t try to get drunk,” she said.

The event began in the gymnasium with a video produced by Students Against Destructive Behavior, showing how making poor decisions like drinking alcohol can affect the lives of families far beyond those directly involved in accidents.

Cathy Andreozzi, whose gifted, athletic daughter Tori Lynn was left permanently disabled after being hit by a drunk driver, also spoke about the disastrous consequences of making bad decisions such as driving drunk.

The students then walked to the football field and watched as Westerly police, Westerly and Pawcatuck firefighters and the Westerly and Ashaway Ambulance Corps converged on the scene and began to extricate the victims, in one case cutting away the frame of a mangled car.

“I’m sure many of them have never seen anything like this,” said Westerly Police Capt. Shawn Lacey. “This is about as ‘real life’ as it gets as far as a mock situation. When you start talking about serious injuries and death and you look at the damage to the cars as they start cutting the cars up, it will definitely have an effect on them as to what actually happens.”

Senior Ben Duerr and junior Jacob Ahern watched the drama unfold. Both said they liked the growing trend of students sharing the cost of a limousine and driver on prom night, because it kept teens from getting behind the wheel.

“It gives them a guaranteed arrival point,”Ahern said.

Duerr added, “It’s dumb for them to drink in the first place, but it’s definitely a guaranteed safer way.”

As the six bodies lay covered on the field, a Lifestar helicopter landed nearby to transport a victim who was critically injured.

The teens’ attention began to wander and some began to chatter and laugh.

“We do it because we do believe it makes a difference,” Ruscito said of the event. “It’s tough. When you’re young, you don’t think it’s going to happen in your neighborhood, or happen in your life...or you’ve got control of it.”

The students started walking back to class.

“Can I go with you?” one girl shouted at the helicopter as it lifted off and flew away, carrying the critically injured “victim” to the nearest trauma center.

“Take me with you!” she said, laughing.