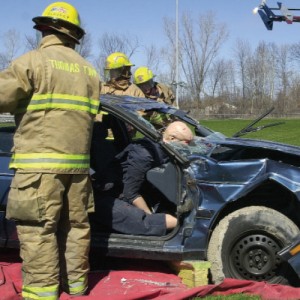 The crash depicted the scene of a two car crash on prom night, resulting in the “fatality” of six students, and the injury of one, and one arrest.

Prior to the crash, which was staged on the track, juniors and seniors (the age group SADD felt was of a higher risk to be exposed to such activities) were placed in the gym and shown a brief video.

The video depicted two groups of high school students getting ready for prom; one group consuming alcohol beforehand. The video ended with both groups of teens entering their cars, making their way to the prom.

A staged 911 call was then made, alerting students of the “crash” which they later made their way to.

Prior to going outside, Cathy Andreozzi, whose daughter Tori’s middle school encounter with a drunk driver left her permanently debilitated, spoke to the group about the severity and possibilities of driving under the influence.

Students listened quietly as Andreozzi told the emotional story of her daughter’s accident, until they quietly ushered themselves to the track’s bleachers.

Several local rescue squads were at the scene of the crash, including ambulances from numerous districts, police squad cars, trucks from both local and neighboring fire departments, and even a Life Star helicopter.

Emergency rescue personnel treated the situation as though it were a real life emergency, and students watched intensely as the crew worked as fast as possible to “rescue” their peers from the wreck.

As spectators sat quietly, they watched the mangled bodies of their friends lay completely still, covered in blood. One by one, after failed attempts at resuscitation each of the six students were covered with sheets and left for students to understand the harsh consequences of drinking while driving.

Of the six students killed that day, one was senior class co-president, John Pacitti.

“I hope this really impacted the students at our school,” Pacitti said.

Pacitti added “I hope kids realize that if they got behind the wheel after drinking, they aren’t just endangering themselves, they are endangering everyone else that’s on the road, even strangers. It just seems like most kids feel like that stuff wouldn’t happen to them, and hopefully this made them realize it could happen to anybody”

Junior, Jessica Fontana believes this activity was a “wake up call” for many students, explaining “the car crash was a success because it showed what could really happen if one student made one stupid decision, how many people it could really impact”.

Fontana believes this operation should be continued in the future because “even if just one student takes away from it, that’s one more student educated that was not aware of the consequences before, and the operation is a success”.

Administrators and community members also believe the mock car crash was a successful display of the dangers of drinking and driving, and wish to continue this event for future students to come.