MADD-RI Urges State to Buckle Down on Drunk Driving Laws 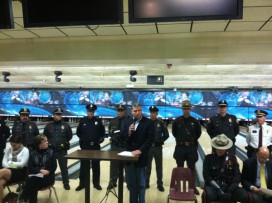 East Providence Police Chief Joe Tavares said that he saw Saturday's kickoff event as a reminder "to do more" to curb drinking-and-driving across the state. Tavares, who later accompanied his fellow officers tying a MADD ribbon to police cars, also pointed to efforts in East Providence to curb drinking issues.

"We're taking on many of the liquor establishments, both retail, restaurants and others, so as to prevent that individual from even getting into the vehicle," Tavares said. Tavares also mentioned the ﻿city's youth decoy program  as an example of individual communities fighting alcohol abuse. The program has resulted in ﻿multiple violations and ﻿showcase hearings across the city.

"There is much work to be done," Andreozzi said. "There are [many] steps that can be taken. Rhode Island has been in this battle for over 30 years and certainty it's not for the lack of efforts, but we are still at the bottom."

MADD has developed a rating system by which it measures each state. Ranging from one to five stars, the ratings are tied to how many of MADD's suggestions a state implements. These include sobriety checkpoints on roadways; administrative license revocation; child-endangerment laws; vehicle interlock systems for first-time convicted drunk drivers; and no-refusal laws.

By MADD's standards, Rhode Island is lagging in efforts to effectively deal with drunk driving. The group has assigned the Ocean State one star, a sole recognition of its present child endangerment laws relating to alcohol. Yet Saturday's event presented the urgency of the organization and its allies to make Rhode Island subscribe to the additional benchmarks devised by MADD.

At Saturday's event, Steven Pare, commissioner of Public Safety for the City of Providence and chairman of MADD-RI, referenced the slightly higher ratings handed out by the group to Rhode Island's neighbors, along with a statistic that placed Rhode Island in the "top five states in this country that continually has a high percentage of alcohol-related fatalities."

The state's legislature has been reluctat to adopt MADD's proposals, citing their potential unconstitutional nature, according to Pare.

"There's alway a balance with freedom, and there's always a balance with enforcement and incarceration," Pare said in response to Rhode Island's sensitivity to safeguarding constitutional rights. Pare added that, in the legislature, "there's resistance to the tools which we've advocated."

A resistant General Assembly has not deterred MADD advocate Cathy Andreozzi from focusing on the group's intended results – even if those results mean more of a clamp-down on non-offenders.