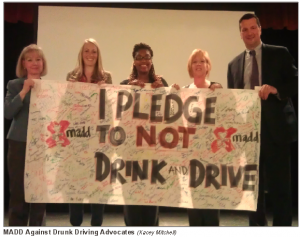 Over 300 of Bryant University’s students, faculty, and staff signed a pledge to not drink and drive in an effort to bring attention to a dangerous action. In addition, two Mothers Against Drunk Driving (MADD) advocates and Bryant University’s Department of Public Safety (DPS) participated in a speakers series hosted by Bryant University’s Society for Resource Management on Wednesday, April 25, 2012 in Janikies Auditorium.

Victim Robin Monica, shared her story about her son’s deadly decision to drink and drive. She emphasized that drinking and driving is a preventable choice, urging people to, “think about the effect your decision has on your family,” before acting.

MADD advocate Cathy Andreozzi, talked about her daughter’s experience getting hit and the struggles they have faced keeping her daughter alive. Andreozzi emphasized that, “life as you know it can change in a moment.” 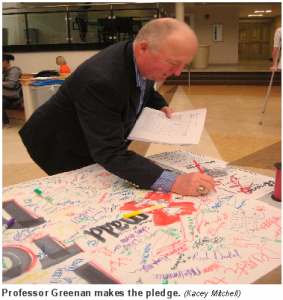 Stephen Bannon, the newly appointed Director of Bryant University’s DPS unit talked about the severity of drinking and driving and the new law that passed allowing officers to obtain a search warrant for blood in cases of DUI.

Candy Lightner founded MADD in 1980 after a drunk driver killed her daughter. Lightner found out that drunk driving was infrequently prosecuted strictly and vowed to advocate for victims and change the legal consequences of driving drunk. In 2000, drunk driving fatalities dropped 40 percent (http://www.madd.org).

About one-half of all fatal car crashes among 18- to 24-year-olds include alcohol (http://www.collegedrinkingprevention.gov) and many of those students are enrolled in college. Drinking and driving on college campuses remains a public health issue and MADD advocates Robin Monica and Cathy Andreozzi alongside DPS’s Stephen Bannon reiterated the importance of the issue.