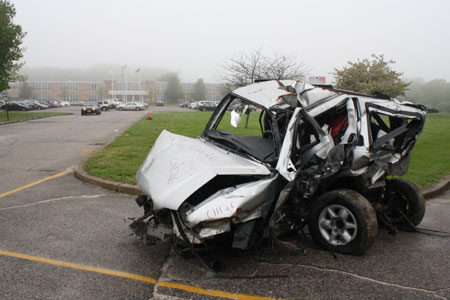 A wrecked car sits in front of Johnston High School as a reminder to students what can result from just one bad decision. Insider photos by Beth Hurd

With the Johnston High School senior prom scheduled for Friday, May 27, (at Newport’s Viking Hotel) members of the school community and the town have done everything they can – as they do each year – to make sure the students get the message: Don’t drink and drive.

In the school’s parking lot sits a car wreck, a visible reminder of what can be the result of any number of bad decisions: drinking and driving, reckless driving, driving while texting or talking on the phone, or getting into a car in which the driver has been drinking.

The students also got a dose of “Don’t Drink and Drive” messages during a visit on May 13 to the school by the Cathy Andreozzi, mother of Tory Lynne Andreozzi, now paralyzed, a victim of a drunk-driving crash. Another group of students visited the ACI on Wednesday, May 18, to attend a session of “Zero Fatalities,” to hear from several inmates currently incarcerated for making similar bad decisions, in which death resulted.

Both the school speaker and the ACI trip were sponsored by the Johnston Coalition to Prevent Substance Abuse, which offered students attending the trip to be entered into a raffle for free prom tickets. (Durham Bus also donated the use of two buses for the trip.)

At the ACI, which currently houses 1,019 inmates, serving sentences of 90 days or more, students were met by Jake Sullivan, a prosecutor.

“They’re my least favorite cases to prosecute,” he said of those incarcerated for the results of their bad decision-making.

Sullivan asked how many of the seniors were 17 and how many were 18.

“It doesn’t matter,” he said – they would be prosecuted as adults if caught drinking and driving.

“In Rhode Island, we see 50 deaths involving teens, on average a year. When you break it down, that’s four a month,” Sullivan pointed out.

He also said the greatest reason for teen fatalities (between the ages of 16 and 22) – a full 25 percent – is inexperience.

“Who’s going to die this month? Nobody thinks it’s going to happen to him/her,” Sullivan said.

Sullivan asked how many had seen road-side crosses and memorials – several had, and called out where they were located; Sullivan knew most of the locations, and could name the victim involved in each.

“For me as a prosecutor, it’s not just another death – it’s real people, it’s sons and daughters, your classmates – and that’s just the dead kids,” he said.

Behind him, a projector showed images of newspaper clippings of teen fatalities from around the state.

Sullivan asked how many wore a seatbelt each time they drove or rode in a car – almost all raised their hands.

“Last year, 45 teens were killed – 43 weren’t wearing their seatbelts,” he said. “Who do teens kill? You don’t kill your family members, you don’t go out drinking with your parents – you kill your friends. These cases do not discriminate, rich or poor, black or white – it doesn’t matter how rich your parents are, you’re still going to jail, or you’re still dead."

The inmates who shared their stories weren’t much older than the seniors attending the “Zero Fatalities” class.

Brandy Graff of Coventry was a senior in high school, her parents away for the week. She had been drinking when left a beach party on April 20, 2005, and killed two elderly sisters who “were taking the scenic route home.”

“I was 18, it was school vacation, my parents were going to be out of the country – it was going to be the best week of my life," she recalled. "I didn’t even make it 24 hours. It’s been six years, but it still feels like it was yesterday. I didn’t kill my best friends, but I killed two innocent people."

Graff said she thought she “knew my limit.” She had also, on many occasions, gotten into a car driven by someone else who had been drinking.

“Every body thinks it’s a rite of passage. If you drink, you will make bad choices,” she said. "You guys are planning to go to college? My college money went to lawyers – very expensive lawyers.”

“Anderson” was 18 and on Shea High School’s basketball and football teams when he killed his best friend Chris, age 21. “I started going to parties, doing things I never thought I’d do,” he said. Anderson started drinking in 10th grade, as well as doing drugs.

On March 6, 2006, he had just bought a new car, having worked hard to earn the money. “I had been drinking but I didn’t think I was too intoxicated to drive – that was the first mistake,” he recalled. He and his friend Chris drove the new car to a party in Smithfield, and crashed into a stone wall – neither were wearing seatbelts.“The only thing that saved me was the air bag,” Anderson said.

“Your friends move on with their lives, I’m stuck here,” he told them. "Every day is the same, there’s a lot of people in here, but it’s the loneliest place."

“Patrick” was given 37 years, 15 to serve. He killed his three best friends, two of whom were brothers. On Oct. 29, 2006, he was driving an estimated 60 to 80 miles per hour when his car crashed. He hardly ever sees his wife and son. “Jake” was given 15 years, eight to serve. He had been captain of the football and track teams at his school, got good grades, “dated pretty girls,” had never done anything wrong.

He now shares a small cell where the toilet is a few feet from his cot and he has to shower with 120 guys in an open room with four shower heads. “I was just like you – I never thought it would happen to me,” he said, even though he had a best friend who had been killed in a drunk-driving accident.

On July 19, 2004, “Jake” had just turned 21, and owned his own restaurant; he came up behind a Jeep he thought was going too slow so he got in front of it and tapped his brakes. The 17-year-old driver of the Jeep, in which there were three other teens, lost control of his car, which flipped before crashing. The driver was ejected from the car because he wasn’t wearing a seatbelt. “Jake,” who initially left the scene but then called 911, was charged with reckless driving, death resulting.

“I spent hours in a police station crying my eyes out – I had never been in trouble before, no one in my family had ever been arrested before,” he said. "They don’t care. That night I was sleeping in a cell with a ‘double-life-plus-life’ murderer. All my best friends left; my girlfriend of three years left me within 10 days."

The last speaker was Dan Corvese, father of 16-year-old Jon Corvese, who was a passenger in a car when he was killed on Nov. 5, 2007, in a drunk-driving accident. His best friend, also age 16, had been driving. Jon had been a member of the Barrington High School varsity soccer team, and thousands attended his wake and funeral.

Corvese, who never imagined that he and his wife would have to plan a funeral for a child or pick out clothes for him to wear in his casket, urged the JHS students to close their eyes for a moment and imagine their own parents standing before a casket, holding a “prayer card” imprinted with their own name. “I’m doing this for Jon – we’re doing this to save lives,” said Corvese.

Sullivan reminded the seniors that new laws against texting while driving also are to save lives. Tests show that when traveling 70 miles an hour, a vehicle travels about 100 feet a second – take your eyes off the road for three to four seconds to read or type a text, you’ve gone 300 to 400 feet.
“That’s how accidents happen – and you don’t ever just have one victim,” said Sullivan.

Johnston Police, for its part, conducts frequent “party patrols” and the school’s student resource officers have a presence at all school dances (the sophomore semi-formal and junior proms have already been held this year).

In another initiative prompted by Johnston’s Coalition to Prevent Substance Abuse, Johnston High School’s SADD organization – Students Against Destructive Decisions – have been working to create a SADD group at Ferri Middle School. On Friday, May 20, students from both schools created a “Chain of Life,” which was hung in the cafeteria of Ferri Middle School, hoping to get the message out sooner.