BoldrDash Attracts Over 4,000 In Largest Mud Race To Date 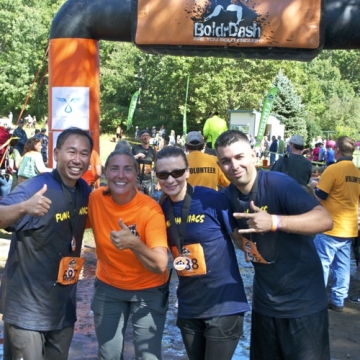 Last weekend, thousands of BoldrDashers and spectators blanketed the valley and tree-lined hills of Exeter’s Yawgoo Valley Ski & Water Park. Stretched and prepared for the momentous task ahead, the first heat kicked off the 3rd Annual BoldrDash Mud Race at 9am on Saturday. For two days, Rhode Island’s only 5k, military-style obstacle course, transformed New England’s southernmost winter ski resort into over three miles of scalable walls, cargo net climbs, muddy belly crawls, and over 20 other obstacles. The biggest turnout ever led to the first two-day Dash at Yawgoo, with over 2000 spectators and volunteers, and nearly 2000 Dashers who came to conquer the course and BE BOLD.

New: kids in the mud

BoldrDash also introduced their first-ever kids’ race. Nearly 400 participants, ages 4-12 tackled obstacles in their own quarter- to half- mile courses. Smiles all around as boys and girls finished – sweaty, wet, muddy, but BOLD – to greet their parents and hundreds of other spectators.

Both days were filled with lots of eccentric characters and local celebrities, from Cranston Mayor Allan Fung who conquered Sunday’s race with his team, Fungamaniacs to Tim McCrohon and Deb Owens of Worcester, MA, who joined the race in full wedding attire after getting married the night before. While individuals and teams – some with painted faces or crazy costumes – raised over $2000 for J. Arthur Trudeau Memorial Center, some teams also raced for their own causes, including Curvy Girls, a support group for Children with Scoliosis. Sunday began with a very special “Hero Challenge” wave for first responders including a first-ever combined team of State Police cadets and the Municipal Police cadets, who raced to support Special Olympics of RI.

Allan Fung gets dirty for a good cause

"It was a challenging course but my team and I had a great time - and I'm proud to say we were all up to the BoldrDash challenge," says Mayor of Cranston, Allan Fung." Now onto even greater challenges for the people of Rhode Island - As hard as I worked on this course, I will be working even harder on their behalf."

“This was just an unbelievable turnout of amazing people and teams. Each race is unique and each course has its own set of challenges,” says personal trainer and athlete, Lynn Hall, who started this event in 2011. “Yawgoo is particularly challenging because racers are tackling obstacles while running up and down hills. But they were all up to the task.”

It takes a village to get this muddy

This year’s race took over 200 volunteers to pull off the immense amount of detail and setup needed for an obstacle course event of this size. They all were welcomed to join Dashers at a free after-party with live music, by Transmission. Many racers took advantage of free onsite services for their aching bodies, including free Olympic taping athletes by HealthSource Chiropractic and Progressive Wellness of North Providence, and injury assessments and post-race stretching by Lepre Physical Therapy. REI also set up a relaxation lounge with Outdoor School fitness experts. The first 1,000 cars to get to Yawgoo received a special gift from The Tori Lynn Andreozzi Foundation with a reminder to #beBOLD, don't drink and drive.

"The course was fantastic, challenging and it was great to have both [police] academies work together…,” said an exhausted Tom Chabot, Basic Training Officer for RI Municipal Police Training Academy. “We'll be back!"

BoldrDash began in Yawgoo Valley as a Mud Race but is now planning other races throughout New England, as well as Beach Races, the first of which took place in Westerly this past May, to support the Hurricane Sandy devastated the area. Another Beach Race is scheduled at Misquamicut Beach on May 2nd, 2014. Registrations for that race will open in November.

“BoldrDash is about boldly overcoming limitations with determination,” said Hall. “At the end of the day, every single participant is a winner and they know what it means to be BOLD.”

View Our Photos from this Event!